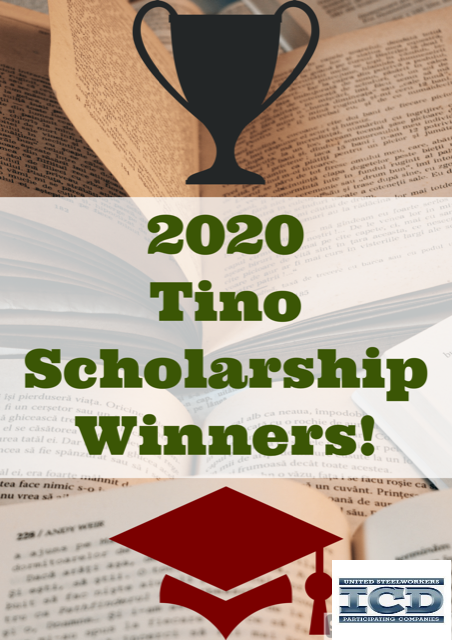 Maureen Kirkpatrick comes from a Steelworker family. She knows all about hard work.

That’s why she appreciates everything her dad, Jim, has done for her.

“My dad has always been the hardest worker I know, and it’s even more amazing because he does it with a smile on his face,” Maureen said of her father, Jim, who works at ATI Metals in Brackenridge, PA.

Jim Kirkpatrick is a member of USW Local 1196.

“No matter how tired he is or how many hours he’s worked that week, I never hear him complain. I look up to him so much for that because I know it isn’t easy.”

Maureen Kirkpatrick, one of the Institute for Career Development’s winners of the Tino Fulimeni Memorial Scholarship, is working on her master’s degree at Gannon University in Erie, PA, where she’s studying to become a physician’s assistant.

“I’m in the fourth year of my five-year master’s program,” Maureen said. “I’m most interested in geriatrics, dermatology, and women’s health.

“I’m very excited about what the future holds, and I’m extremely grateful to be a recipient of this scholarship.”

Tino Fulimeni was a lifelong Steelworker who rose to Special Assistant to former USW President George Becker. Tino was a great supporter of the Career Development Program. He believed strongly in the education of Steelworkers and the value of the learning process. The ICD’s scholarship is a tribute to Tino and he stood and fought for. To date, Career Development has awarded $116,800 in scholarships to the children or grandchildren of Steelworkers.

Meet the rest of the 2020 Tino Memorial Scholarship winners:

Mason attends Purdue University Northwest and is studying Computer Engineering. He’s the son of Kevin Shepherd, who is a member of USW Local 9231 in New Carlisle, Indiana.

“During my father’s time as a Steelworker, he has never stopped providing for me – even when times were hard,” Mason said.

Caler is a junior at the University of Alabama-Huntsville. She is the daughter of USW Local 12L member Tony Staub, who worked for Goodyear Tire and Rubber in Gadsden, Alabama, until its closing in 2020. Caler is majoring in Industrial and Systems Engineering with a minor in math.

Tony actually took a job at Goodyear in Fayetteville, North Carolina, where the entire family recently relocated. Tony has worked for seven tire plants in his career and endured four major layoffs.

“My father has encouraged and inspired me to not complain, but be thankful for what I have and take what I have given to continue forward in life,” Caler said. “When Goodyear in Gadsden shut down, my family had to unite and move forward. My dad’s determination (in moving the family to Fayetteville) will fuel me to become a difference maker in any environment I am placed in.”

Leylani is the daughter of USW Local 1010 member Jesus Zamora. She attends Indiana University where she’s majoring in Psychology with a minor in Spanish. Her dream is to become a psychiatrist.

“I am the first female in my Mexican family to attend college and pursue a white collar career,” Leylani said. “I realized during my junior year of high school that the brain sciences, helping people, and mental health interested me and became my passion.”

Carson attends Eastern Michigan University. He is undecided on a major, but leaning toward accounting.

Both Carson’s parents, Bill and Terri Silcox, are members oft USW Local 1299 in Ecorse, Michigan. The Silcox duo has worked at the U.S. Steel-Great Lakes facility for 26 years.

“My parents’ work ethic has shown me that adversity can be beaten by continuing onward, and staying strong,” Carson said.

Mallary is the daughter of Brian Smith from USW Local 12L in Gadsden, Alabama. She attends Auburn University where she’s majoring in nursing.

Brian Smith, formerly of Goodyear Tire and Rubber in Gadsden, Alabama was actually on the ICD Local Joint Committee for 16 years before the plant’s closing in 2020. Brian had 25 years in at the Goodyear plant.

Mallary is on track to graduate in May 2021.

“My dad continues to inspire me daily with how hard he works,” Mallary said. “For as long as I can remember, he worked mostly 12-hour shifts, but always found time to practice softball with me and attend all my volleyball, basketball, and softball games. He’s my inspiration.”

Steven is a junior at Indiana University-South Bend where he is majoring in accounting and finance.

He accepted and participated in a Co-Op with the Teachers Credit Union and will continue work there until graduation. In January 2021, he will begin an internship in the audit department at Crowe, LLP, in South Bend, Indiana.

Steven is the son of Steve Krcelich, Sr., who is a member of USW Local 9231 in New Carlisle, Indiana.

Jordan is the son of USW Local 1219 member Stephen Rudolph from U.S. Steel-Edgar Thompson Works. Jordan is a junior at Slippery Rock University majoring in Safety Management. Jordan also works as a manufacturing technician at Cleaveland Price/Inc., which is a manufacturer of high voltage switch equipment.

"Being a Steelworker runs in my family, as both my grandfathers were Steelworkers their entire careers," Jordan said. "My dad has carried on the tradition, and I am proud to say that he has worked at Edgar Thomson Works for the past 30 years. I am inspired by his hard work and dedication."

It's wonderful that the ICD is able to help so many college students. Kudos!