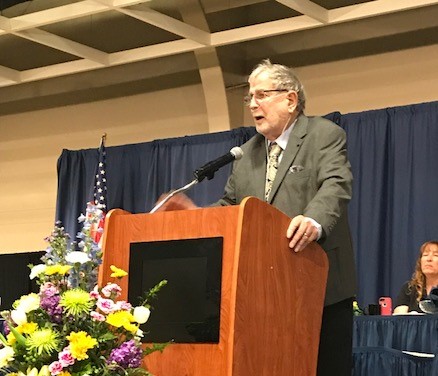 USW Local 307 President Jody Juarez wasn’t the only one in the crowd in Topeka, Kan., who knew Ron Hoover was touched by the honor.

“When (Ron) got up and spoke, he said of all the awards and honors he’s received, this one meant more than anything,” Juarez recalled.

At the retirees’ banquet in April, the ICD 307 Training Center in Topeka was unveiled as the Ron Hoover Educational Center.

Hoover, a former rubber worker and head of the union’s Rubber/Plastics Industry Conference, among other duties, has done just about everything as he rose up the ranks over his 40-year-plus career.

“We wouldn’t have ICD without Ron,” Juarez said. “He’s been a great leader and representative. He’s always taken care of our local and still (helps) with skilled trade. He’s just a good ol’ boy and a great person. Plus, he’s a down-to-earth guy and easy to deal with.”

Hoover, a 45-year veteran of the United Rubber Workers, and following a 1995 merger with the USW, started at the Goodyear Topeka plant as a maintenance mechanic in 1964. He said he got involved with the union in 1970 and over the years served as the plant steward for the old United Rubber Workers (URW) and also on a number of local union committees. In 1983, Hoover was elected president of URW Local 307 in Topeka. He served two terms and then was appointed to the URW staff in 1989. He was a backup coordinator in the union’s 1991 contract talks with Goodyear, and coordinated negotiations with the company in 1994 and 2003.

“ICD is a wonderful program and I’m extremely proud about bringing it to the rubber workers,” Hoover said. “It took a lot of work in negotiations and a lot of convincing, but it’s such a great program to have. It really has helped a lot of people over the years and it’s still helping.”

That includes Hoover’s son, Shaun, who works at Goodyear in the Topeka facility and has taken college courses through ICD.

These days Hoover, who still advocates for the program as a member of the ICD Advisory Board, is relaxing with his wife, Linda, in Wabash, Indiana, and enjoys watching his four grandchildren and seven great-grandchildren grow.

“He’s retired, but still gives advice,” Juarez said. “You can call him at any time and he’ll say, ‘Let me think about it and get back to you.’ And you know what? He always gets back to you. That’s just the way Ron is.”