From Our Own Backyard: Pete Smith 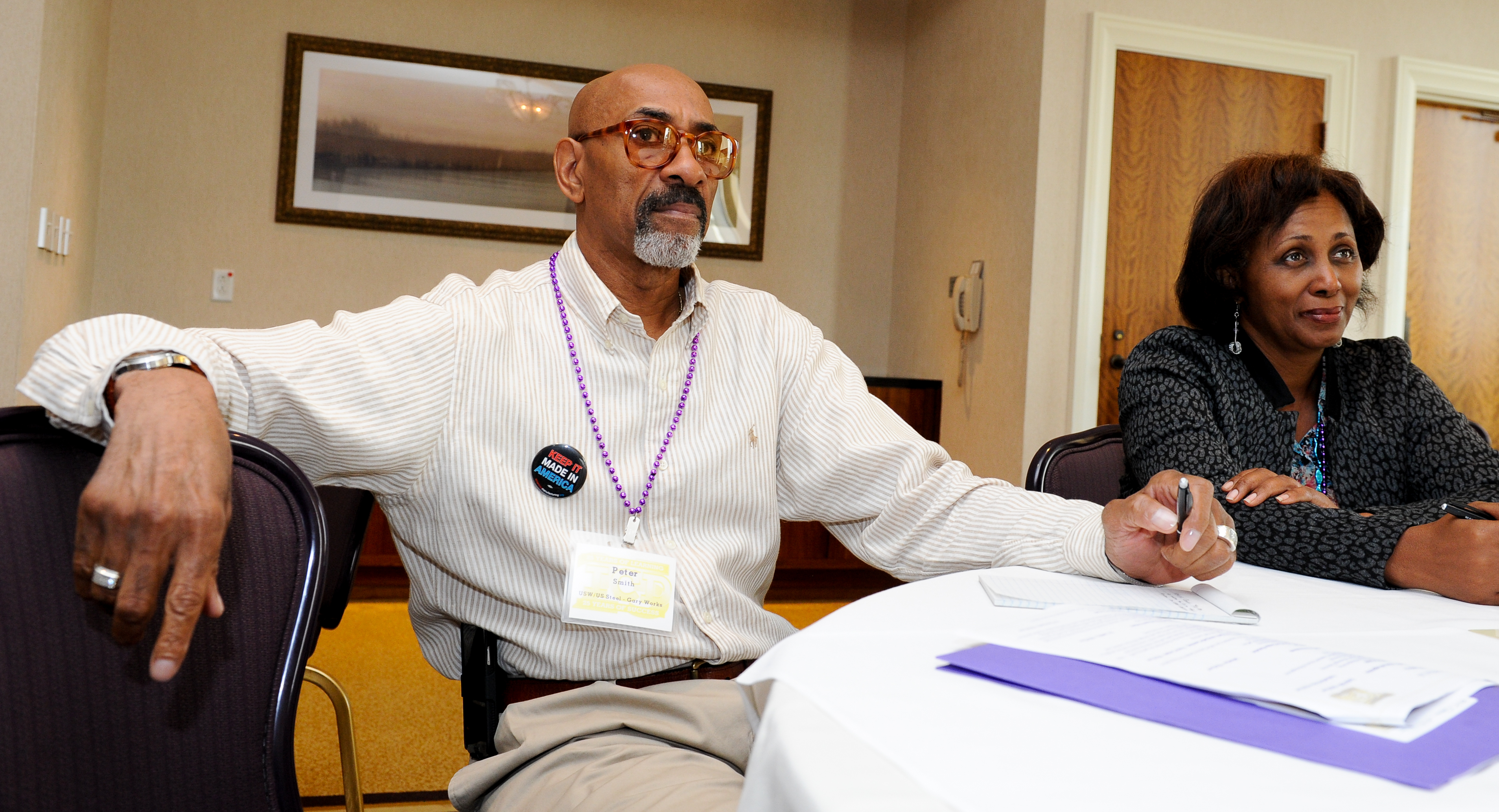 From Our Own Backyard: Pete Smith

The most interesting man in the world is NOT a TV pitchman for Mexican beer.

As it turns out, he is a father of three, a youth mentor, an All-American, one of 16 children, a member of two Halls of Fame, a cancer survivor, an Army veteran, a world-class high jumper, a husband, a community activist, a marathon runner, a grandfather of six, and a 1996 Olympic Torch Bearer.

He is also a Steelworker of 39 years and an active member of the USW/U.S. Steel-Gary Works Local Joint Committee. You know him as Pete Smith.

So how do you begin to tell a story as fascinating as Pete’s?

Born in Hammond, Smith was one of seven boys and nine girls – number four from the top – all living together under the same roof.

“My dad had 25 children that we know of, between two different wives,” Smith said.

It was one room for the boys and one for the girls, two sets of bunkbeds and a pallet on the floor for the boys, according to Smith.

Smith’s older brother, Percy Edwards III, a union electrician at ArcelorMittal, got Pete his first job when he was 12, washing pots and pans and sweeping the floor at a local bakery. He’s been in the workforce ever since, going from the bakery to a grocery store and cutting grass on the side.

“We always worked,” Pete said. “There was a work ethic that was passed down from Mom & Dad. If you want to eat, you have to go out and work.

A standout athlete in both track and basketball at Hammond Tech High School, Smith was a state finalist in the high jump his junior and senior years. He earned a scholarship to Rust College, a historical black college in Mississippi, and he eventually earned All-America honors. With a personal best high jump of 6’10”, Smith qualified for a chance to make the 1968 Olympic team but lacked a sponsor and was unable to find the financial backing to fulfill his Olympic dream.

“I never knew how to obtain a sponsor and I didn’t have an agent,” Smith said. “I was just another guy who had talent, but I didn’t have a clue until it was too late. It’s an opportunity I regret missing.”

With the opportunity to compete in Mexico City having never materialized, Smith returned to Rust at the same time the Vietnam war effort was ramping up at home. Smith had his “lottery number” drawn during his junior year at Rust.

“At that time they were taking away all deferments,” he said.

Smith was drafted in Chicago and shipped out to Fort Lewis, Wash., for basic training.

“My whole company was determined to be ’11 B,’ better known as ‘Eleven Bravo,’ which meant we were trained for the jungle of Vietnam,” Smith said.

“We were being shipped right into the bush.”

But two weeks before he was set to receive his orders for Vietnam, Smith, along with the rest of his battalion, was given an aptitude exam.

Smith tested out as having clerical skills and was made a finance clerk. He was pulled from his battalion and sent to Fort Leonardwood, Mo., and then on to Germany.

“A blessing. God definitely had me in his hand,” Smith said. “Just about my entire battalion was wiped out (in Vietnam).”

Once the Army learned of Smith’s athletic background, they assigned him to Special Services and he toured Europe playing basketball and running track for the Army.

Smith left the military in 1973 and started working for a friend who owned a men’s clothing boutique. He traveled all over Europe buying and selling men’s clothes, until hearing of his father’s passing in 1978.

Smith returned home for a memorial service and hired in at Youngstown Steel in East Chicago, Ind., with the intent of making some money and returning to Europe.

As it happens, life had other plans. At work one day he met a woman, Toni. Two years later, they were married. Shortly after that, twins Aaron and Bree arrived to join Toni, Pete and Ebony, their eldest daughter.

It was Bree with whom Pete ran the Chicago Marathon in 2010. It was a monumental last step, of sorts, in his victory four years earlier over cancer. Stage 3 colon cancer.

“Here I am thinking I’m the healthiest guy I know. I’m doing all the right things,” Pete said. “”I was eating right and staying in shape, and, ‘Boom! Cancer.’ “

Smith had a section of his intestine removed and was scheduled for 10 sessions of chemotherapy. He wound up not having to complete all the sessions.

“I was never fearful,” Smith said. “Through the support of my wife and children, and great decisions of the doctors, I am 10 years cancer-free!”

Smith’s faith plays a big role in his life. It was through his church, Living Word Christian Center in Forest Park, Ill., that Smith found the resolve to go through the training and the 26.2 endurance test of the marathon.

“They taught us there would be a time we would want to give up,” he said. “There were certain Scriptures I kept in my head and just kept repeating to myself when we were in training.”

Part of Smith’s belief system centers on service to others, particularly those most in need.

“My faith tells me we will be judged on how we treat those less fortunate then us,” he said.

Smith’s commitment to serve has manifested itself in many ways. In his Steelworker world, Smith is a Training Coordinator and has served as a past local union president, a steward, a Civil Rights Coordinator and currently Sub-District 5 Financial Secretary.

It is his work in the East Chicago community, however, that really drives Smith.

“I am blessed to be a part of a philanthropic organization that gives meaningful life-changing opportunities to inner city youth,” he said.

It should be clear by now that Smith has had more than his share of those – life-changing opportunities. He’s a real life Forrest Gump in a way.

More than 20 years ago, Toni, by then a Parent Liaison at Field Elementary in East Chicago, came home one day and issued a challenge to her husband: can you start a youth mentor program at the school?

“She noticed there were only three males working at the school – the principal, a math teacher and a janitor,” Smith said. “So you had all these young boys, many of whom didn’t have fathers in their lives, who needed some direction.”

With the help of a coach and fireman as volunteers, Smith began a series of weekly meetings. Eventually they formed Cub Scout Troop 290.

Word soon spread among Smith’s co-workers at LTV Steel, many of whom started taking an interest. Eventually, company management found out as well.

“They would help me fund outings for the young men to basketball games, the museum or roller skating, things like that,” Smith said.

Smith’s youth mentoring program had a profound impact. It helped provide a path toward a positive and productive future for many kids who couldn’t envision one up until then.

During the same time, the 1996 Olympic Committee was asking America’s help in promoting the Olympics in Atlanta. It was marketed as “the last Olympics to be held in this country, in this century (20th).”

The Committee was looking for people to carry the Olympic torch that the community considered doing something significant – not a fireman or policeman who are generally considered heroes, but average citizens making a difference.

People took notice. Unbeknownst to Smith, a co-worker at LTV had nominated him for the United Way’s Community Heroes program. The United Way then passed Smith’s information along to the United States Olympic Committee, which was looking for hometown heroes to carry the Olympic torch that year for the Games in Atlanta.

Smith carried the torch from East Chicago to Gary. It’s an honor very few will ever have. He gets emotional talking about what it means.

“I’ve had some great honors in my life,” he said. “But what I find in my life is that my biggest accomplishments came from me helping other people.

“When I started giving back was when the real rewards happened for me.

“I would like to thank ICD for the honor of allowing me to share a snapshot of my life with my Brothers and Sisters of the United Steelworkers of America.”