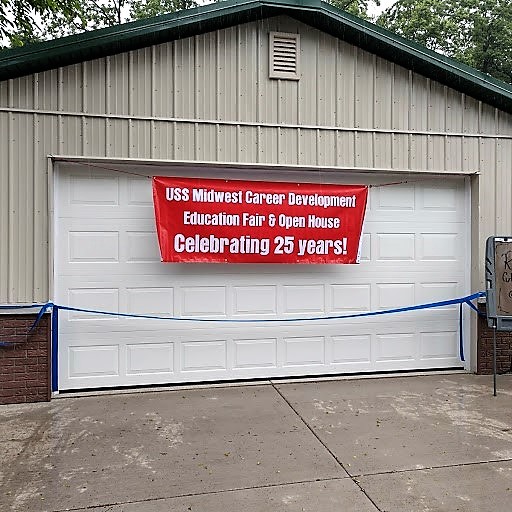 If you build it, they will come.

And they sure did at the USW/U.S. Steel-Midwest Career Development Educational Fair and Open House on Thursday, June 21.

A special ribbon cutting ceremony for the new classroom was the highlight of the event.

“I’m really excited. It’s a great way to expand classes for our workers,” USW Local 6103 President Mike Young said. “It opens up a whole new spectrum of what we want to do.

“It’s the kind of things these (ICD) classes are capable of. It’s a win-win situation for us.”

What started as green space three years ago moved into a pavilion/shelter area with a grill, and eventually transformed into a full-scale classroom with about 150 Steelworkers pitching in along the way.

Classes that helped put pieces of the puzzle together included framing, steel siding, insulation, electrical, furnace installation, drywall and mudding, painting, and landscaping to help bring it all together.

“There were a lot of trials and tribulations, but it was so rewarding,” ICD instructor Bill Cameon said. “We had workers who never put a duct in that finished a furnace! These hands-on classes were truly what put this thing all together. It’s quite an accomplishment.”

The newest classroom was much needed since small engine repair classes were being held in the main facility. Young and Cameon both agreed the exhaust fan in the building just wasn’t cutting it and something had to be done.

“And we didn’t have enough room for our HVAC classes,” Young said. “We’ve been back-logged because of a lack of space. Now there’s talk of using the new classroom for it.”

ICD Site Coordinator Tracy Clark took the honors of cutting the ribbon and welcoming visitors to the site.

“We had Steelworkers and retirees helping out (on the project),” Clark said. “It’s a benefit to all of them for helping get it done.”