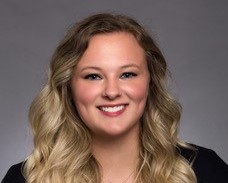 Tino Fulimeni was an advocate for education.

He would have loved Karlie Hill.

Hill, one of the Institute for Career Development’s eight recipients of the memorial scholarship named in honor of former Steelworker Tino Fulimeni, continues to pursue further education.

The daughter of USW Local 1196 member and contract coordinator Walt Hill, Karlie is currently working on her master’s degree at Penn State University.

A recent graduate of Jacksonville University, Karlie Hill is also working at nearby Penn State-Altoona as an assistant coordinator in the Residence Life Office.

“My career goals are to make an impact in college students’ lives, empower student leaders, and to hopefully one day become a Dean of Students at an institution,” Karlie said.

“The union has helped my family out a lot and been a big part of our lives,” said Jones, one of eight winners of the Tino Fulimeni Memorial Scholarship.

“I appreciate everything the union has and continues to do for me.”

The younger Jones, whose father Matt has worked at BF Goodrich in Tuscaloosa for 20 years, is a freshman majoring in Family and Consumer Sciences with a concentration in education at the University of Montevallo (Ala.).

Blake Lewis and Rebecca White are both recipients of the Tino Fulimeni Memorial Scholarship. Both their fathers work for ArcelorMittal-I/N Tek & I/N Kote in New Carlisle, Indiana.

Lewis, the son of Kent Lewis, attends Purdue University Northwest and is majoring in Organizational Leadership and Supervision with a concentration in Environmental Health and Safety.

Blake served five years as a construction mechanic in the Navy before being honorably discharged in 2016. His younger brother, Collin, is a senior at Ball State University.

White, the daughter of Jeffrey White, is a freshman at Indiana University in Bloomington.

Rebecca was a member of the National Honor Society and lettered in cross country and track in high school. She’s majoring in biology and is a member of the IU rowing team. Her father, Jeff, is a Computer Technician at I/N-Kote/Tek and has been a Union Steelworker for more than 30 years.

Local 979 in Cleveland earns a Tino

Davis, a National Honor Society member all of high school, is on the Dean’s List at Youngstown State where he plays in the YSU Youth Orchestra and Percussion Ensemble. He’s earned several honors, including Instrumental List Magazine Musicianship Award in 2016 and the Academic Excellence Award (British Literature). He’s helping as a drum teacher for Music 101 and is a pit percussion instructor for two local high schools in Ohio.

With the talk of layoffs at U.S. Steel-East Chicago Tin, Andy Govert was happy to hear some good news: His daughter, Anna, was one of ICD’s eight recipients of a Tino Fulimeni Memorial Scholarship.

Anna Govert is a TV major with a focus on camera operation at Columbia College in Chicago.

“I’ve loved TV for as long as I can remember and after watching the BBC show ‘Merlin’ I decided I had to be a part of it,” Anna Govert said. “I just have a love for TV and want to pursue a career in it.”

How ironic that Art Holmes has used the ICD tuition assistance program to earn two degrees. He truly believes in education.

His daughter, Rhianna Holmes, was a winner of the Tino Fulimeni Memorial Scholarship.

Rhianna is currently working on her associate’s degree in aviation maintenance technology at Vincennes University.

“One of my favorite quotes is from (Greek writer) Nikos Kazantzakis: ‘In order to succeed, we must first believe we can,’” Rhianna said.

Local 6103 parents have been Steelworkers for 55 years

Melanie Massey has worked at U.S. Steel-Midwest Steel for 25 years; her husband, Lee, has been at the plant in Portage, Indiana, for 30 years.

Their daughter, Valerie, is a winner of a Tino Fulimeni Memorial Scholarship.

Valerie, a sophomore at Purdue University, is studying Actuarial Science and Applied Statistics with a business minor. In addition, she’s pursuing a degree in English education, educational philosophy, and creative writing.

“We are very grateful for the Career Development program,” Melanie Massey said. “It’s a great benefit for the Union.”

Mom and dad have both utilized the ICD benefit as well.

Lee, a millwright and planner in tin products, has received certifications in computer information systems as well as college credit from Ivy Tech.

“This was made possible largely by the Career Development Program negotiated by the Union,” Melanie said.